The 2011 Cricket Awards were presented on Friday 7th October... 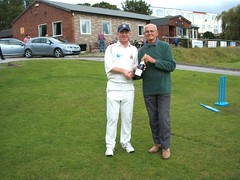 ©110820-nhitchell
6 years ago ago by Old Parkonians.Nick Hitchell getting the Chairman's Champagne for his second century of the season, scoring 102. 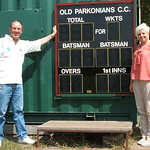 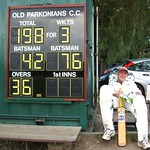 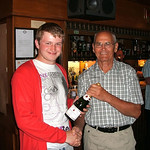 From the top left... 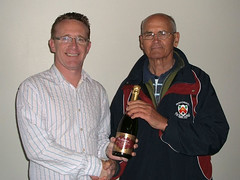 ©110517-nhitchell
6 years ago ago by Old Parkonians.Nick Hitchell receives his Chairman's bottle of Champagne for scoring the first century of the 2011 season.

Chris Beckett nearly claimed another bottle yesterday but fell one wicket short with excellent figures of 6 for 14. 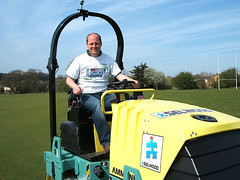 The heavy rolling prior to the season is carried out to compact the square, hopefully to a depth of 6 inches (all the wickets), flatten the undulations that have arisen during the winter, remove any air pockets and bring up moisture which evaporates off.

NatWest Cricket Force is a scheme sponsored by the bank for cricket clubs to get their members to donate time, equipment, paint etc, to get ready for the new season via a volunteering weekend. 2000 clubs are registered this year. Interestingly the RFU have now started a similar scheme.

Hello and welcome to the start of the new 2011 Cricket season at the Old Parkonians.

I am the new Club Captain and firstly I would like to thank Dave Colebourne for the hard work that he put in last season. It was a very tricky year which was affected a lot by poor availability. This had a major impact on the performance of the sides and was a major influence in the position that both sides found themselves in. Thanks Dave.

In a change of Selection Committee Chris Hitchell is the new Chairman of Selectors and Carl Brannon is the 2nd Team Captain. Hopefully we can fulfil your cricketing needs for the year.

We will be in the Cheshire Cricket Alliance this year and will be looking to get promoted with enjoyment and good cricket. Thus far, we are still awaiting information regarding the league and who we will be playing.

Nets will be starting on Monday 7th February from 8-9pm at Birkenhead Park. It is imperative that we encourage new and old members to the club. Anybody who fancies having a go can come along. As a club we need to encourage and nurture players so that they are keen to play week in week out. We have a thriving junior section which can become a force in a few years. We want those children to be playing and enjoying cricket when they enter open age. Not at a club that has two struggling sides. They are the future of the club. Let’s rally together.

There are going to be many things to look forward to this season. Easter social will be taking place so keep your diaries free for that date. Tour to either the Isle of Man or Durham around the 24th July, diaries for this to be kept clear as well and also a sixes tournament sometime in August organised by our very own Steve Fletcher. A practice game is in the process of being organised as well which will be a Captains XI vs Chairman’s XI.

Visions for the Season

To enjoy the game and drink lots of San Miguel all night.